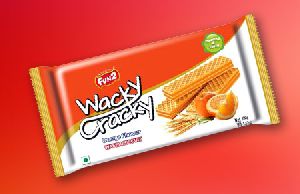 Milk coated wafer is a thin, crispy, crunchy biscuit. Fresh wafer biscuits are always a pleasure to eat. Large flat sheets are sandwiched with cream before processing. Wafer variants are cone-shaped, folded, and of hollow ball forms. Let's discuss the complete production process of crispy wafers biscuits. We are the best milk coated wafer manufacturer in our country.
Production Process Of Wafer
Ingredients Required
Benefits Of The Ingredients
Mixing Of Batter
Mix the raw materials to achieve homogeneity. Mix them for 2.5 to 6 minutes. Use high mixers instead of slow mixers to avoid gluten strand formation. Thus you can avoid strings and lumps from the mixed batter. If you start the mixing process immediately after assembling all the ingredients, the possibility of dough formation is reduced between flour and water. Use cold water to reduce gluten string formation.
There may be lumps after mixing the batter. A screen removes lumps and a constant mild agitation prevents parting in the batter. Air that is incorporated in the batter after mixing reduces thickness.
Baking
Use wafer ovens to bake. Ovens are formed of heated metal plates. Gas flames are impinged directly to heat the plates. There are 20 pairs of plates in a single plant. The plate surfaces are artistic, elaborate, or of reticulate patterns.
The batter is deposited across the lower plate. The upper plate is locked and closed. Steamed is formed rapidly. This helps the batter to spread throughout the gap between the plates. The thickness of wafers depends upon the gap between the two plates. Qualities of milk coated wafers depend upon the closure speed of the plate. Faster closure offers thinner milk coated wafers.
Conditioning
Moisture is added to the wafer either by keeping in a humid room or bypassing the wafers through a humid chamber. This process is known as conditioning. When you add moisture to wafers, it expands wafers. A 1% increase in moisture leads to a 0.2% increase in each dimension.
Cream Sandwiching
The cream is added to the wafers by cream coated rollers. The warm and soft cream is better than the cooler stiffer one.
Cooling
10-12 degrees Celcius is needed to cool down the wafer sheets. Keep the humidity of the air as low as possible. By cooling exposed wafers pick up moisture. Don't keep the cooled wafer books at a surface temperature below the local dew point. Warping leads to the parting of wafers from the cream.
Cutting
Cutting of the cooled wafer books is done by blades, circular saws, and taut wires. These are cut into the square size or rectangular size.
Thus, the milk coated wafer biscuits are ready for packaging and storage.

This entry was posted on December, 05, 2020 at 12 : 37 pm and is filed under wafers. You can follow any responses to this entry through the RSS 2.0 feed. You can leave a response from your own site.